Escutcheon is a rules light TableTop Role-Playing Game (TTRPG) developed for Dice Jam in which instead of having a character sheet, your attributes are derived from the design of your escutcheon.

To play Escutcheon you will need:

A single .PDF file which can often be opened by your web browser, alternatively you can use Adobe Acrobat Reader.

Brilliant ! I've had this idea in my head for years, but you've organised and laid it out beautifully.

Do you plan to revise it someday? I think you shall add rules for furs. In my homeland (Brittany), ermines are to be found everywhere ;-)

Thank you so much!

I did look at including more patterns for the escutcheon field but they were starting to take up too much space (the game jam I submitted this for has a page limit) and some are really quite complex to try and create templates for, especially the furs and treatments.

However, I did try and include a bit of a catch all though so that players can get a little more inventive in their designs. In the second paragraph under "Creating An Escutcheon" there's the following:

"With approval from the GM other designs such as barry divisions, treatments or furs can also be used."

The idea is that hopefully any reasonable GM will then allow things that divide the field into two colours, such as ermine & vair fur patterns and crusilly & semy-de-lys treatments.

I hope this helps and I hope you have fun playing the game! :) 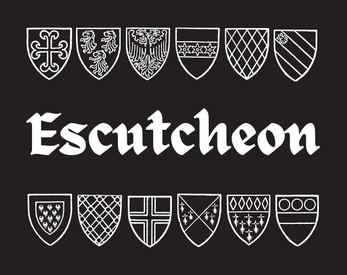